This is an article that highlights one of the exercises used within a course on assertiveness and open communication within Centrum Vaktherapie called Skillslab. If you are interested in developing yourself or helping others develop themselves this article will give you some practical knowledge! This article is part of a series of articles on practical exercises around self-curiosity and assertiveness.

Ask the participants to write continuously for a specific time (for example somewhere between 5-10 minutes). Tell them that what you write does not matter, the only goal is to not pause to review or reflect. Their hand should keep moving throughout the exercise! When the time is up they can read what they have written and use some or all of the text in whatever way they like to create a poem.
When everyone is done it is optional to invite the participants to share their poem with the rest of the group. Remember that telling them that a sharing will take place afterwards may alter how they feel or what they write, so use this instruction with awareness. Variations of this exercise can be found at the end of this article.

When I started using this exercise I was not in the slightest aware of it’s original usages or historical context, I just picked it up from a wonderful poetry workshop where it was presented as a possible tool in overcoming writer’s block while writing poetry. In this workshop we were given a sentence stem: ‘I woke up today and…’ we were then instructed to continue writing for 6 minutes straight. Maddelena Argropoulos one of the beautiful poetry enthusiasts who gave the poetry workshop told us: “The only rule is to not stop writing, even if you don’t know what to write about you can write about not knowing what to write.” I found this explanation in a associated writing method called ‘free writing’, but more on this later, I shall not stray from the topic and confuse you.
As I find writing poetry can be very therapeutic, in writing and sharing, this exercise was one I quickly started applying in a therapeutic context. While researching it’s roots, I found the origins of this exercise useful to support the shaping of this exercise into a therapeutic one. In this light, I would like to share with you some more background information on where this exercise originated and with what purpose. 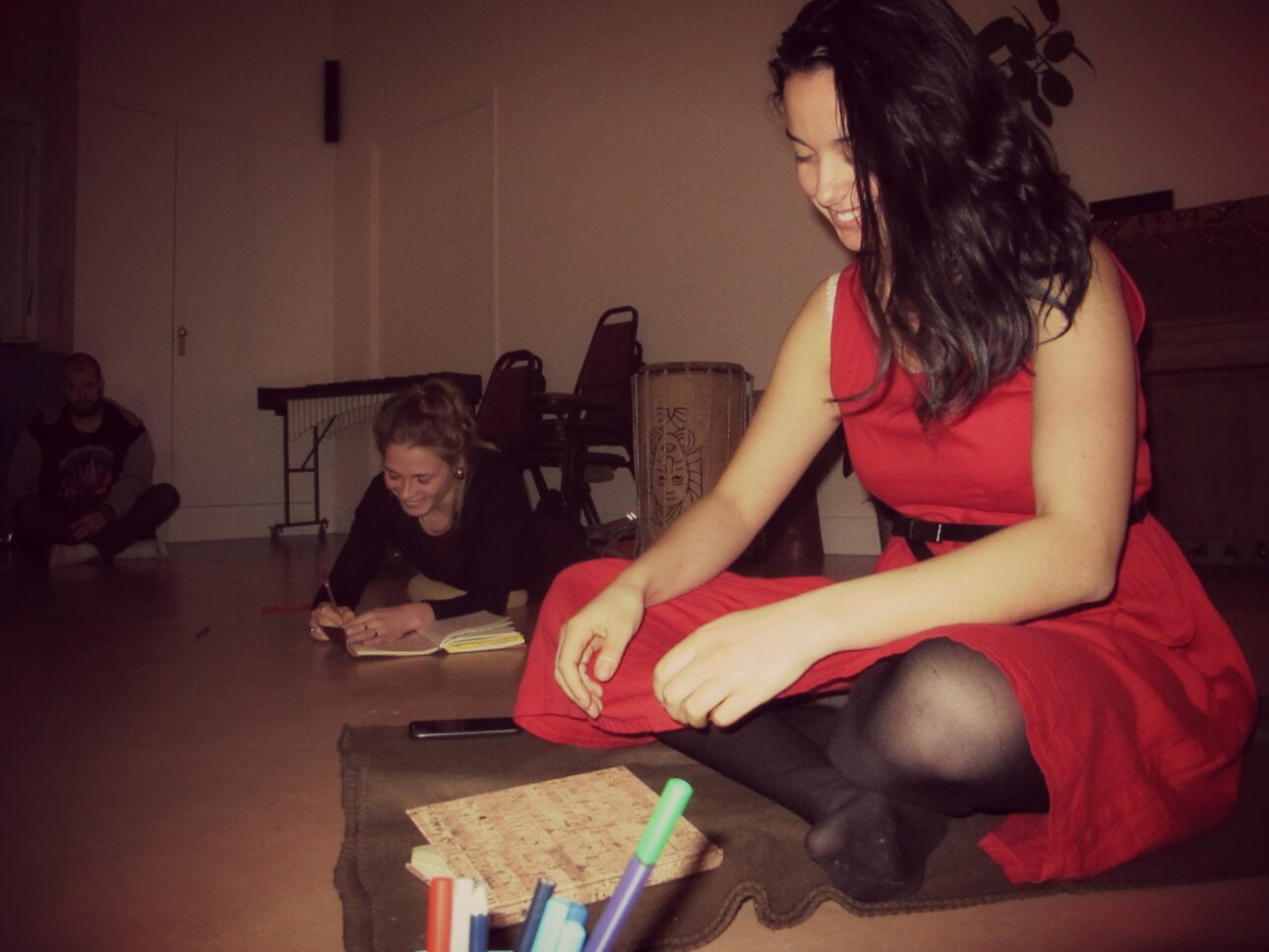 In both Literature and Psychology the term ‘stream of consciousness’ makes an appearance and both these fields offer information to enhance the appreciation for this exercise and variations on it’s theme.
The term “stream of consciousness” was coined by philosopher and psychologist William James (1842 – 1910). James was influential in the shaping of the philosophy of psychology in the late nineteenth century in America. He was one of the first people who tried to conceptualize the constant stream of our thoughts, in print while also writing about his theories on brain functioning in relation to psychology (in the Western world, I should add. In Buddhist philosophy this concept is written about centuries BCE).

“Consciousness, then, does not appear to itself as chopped up in bits … it is nothing joined; it flows. A ‘river’ or a ‘stream’ are the metaphors by which it is most naturally described. In talking of it hereafter, let’s call it the stream of thought, consciousness, or subjective life.” </font size>William James (1890)

In literature this term pops up almost a century later, and the use of the term at this time points towards ‘Attempting to depict the multitudinous (i.e. numerous) thoughts and feelings which pass through the mind (Cuddon, 2014, p. 866)’.
In 1918 the novelist May Sinclair (1863–1946) first applied the term stream of consciousness, in a literary context, as a narrative device (to move the plot forwards) that attempts to give the written equivalent of the character’s thought processes. Stream-of-consciousness writing is usually regarded as a special form of interior monologue and is characterized by associative leaps in thought and lack of some or all punctuation. (This is different from dramatic monologue, where an audience or another is addressed.)

The format the girls in the poetry workshop used seemed to be inspired by not only ‘stream of consciousness’ as a writing style in literature but also by a writing technique called ‘free writing’ (Brande, 1934). This technique involves continuous writing, usually for a predetermined period of time (often five to fifteen minutes). The writer writes without regard to spelling, grammar, etc., and makes no corrections. If the writer reaches a point where they can’t think of anything to write, they write that they can’t think of anything, until they find another line of thought. The writer freely strays off topic, letting thoughts lead where they may.

At times, a writer may also do a focused freewrite, letting a chosen topic structure their thoughts. Expanding from this topic, the thoughts may stray to make connections and create more abstract views on the topic. This technique helps a writer explore a particular subject before putting ideas into a more basic context. Freewriting is often done on a daily basis as a part of the writer’s daily routine. Also, students in many writing courses are assigned to do such daily writing exercises (Written by a well versed stranger on Wikipedia).

What appealed to me about the exercise was that it was a way of getting people to express themselves creatively without a lot of pressure. This aspect is highlighted in the free writing technique: ‘Free writing is based on a presumption that, while everybody has something to say and the ability to say it, the mental wellspring may be blocked by apathy, self-criticism, resentment, anxiety about deadlines, fear of failure or censure, or other forms of resistance. The accepted rules of free-writing enable a writer to build up enough momentum to blast past blocks into uninhibited flow.’ (Cole, 2001) Free-writing is all about loosening and limbering the thought process, not about a product or a performance for a student or a writer. (Robinson, 1967)

This unpressured form of creating content is highly useful in a context where the person you are working with is blocked by low self-esteem or negative emotions. It resonated with me because I often come across the situation where a cliënt feels incapable of asserting themselves or creating anything where they are the main source (and thus the main recipient of possible criticism).
As an intervention I often either make the exercise in question more structured, which means they have to come up with less themselves and have more guidelines. (Guidelines and structure are a sort of instant-safety-noodles.)
Another intervention I frequently pull out of my sleeve is trying to convince the cliënt that the result does not have to be good. This is actually really hard to do; many people are result oriented. That is what makes this exercise great; the result doesn’t have to be anything in particular, let alone good, this is inherent to the exercise.
I think over half the exercises I make the people in our improv group do are process oriented versus result oriented. I imagine this is one of the reasons people feel relaxed and happy when they walk out of our space after playing.

Another reason I saw a lot of potential in this exercise is it’s accessibility. It quickly produces personal material you can use in additional exercises in a way that does not ask people to show or share a lot of themselves.
While I was excited for these reasons I did not pay much attention to the part the sentence stems played in the shaping of the exercise and it’s results at the time. Luckily I found myself listening to ‘the six pillars of self esteem’ by Nathaniel Brandon a few weeks later. And luckily he kept going on and on and on about sentence stems.
He writes about how he used sentence stems in self-esteem groups. An example he uses is: ‘To me, self-responsibility means…’ he then instructs to “…write this down (..), then, as rapidly as possible, without pausing for reflection, write as many endings for that sentence as you can in two or three minutes – never less than six, and ten is enough. Do not worry if your endings are literally true or make sense or are “profound.” Write anything, but write something.”
I can’t be sure, but I presume this audiobook inspired me to start using specific sentence stems in workshops. I’ve found that sharing parts of writing that flows from this exercise combined with the use of sentence stems can lead to (self) reflection and invigorating discussion.

In this last example you can clearly see that different sources can be combined to create useful exercises, I find the most important part to be the reflection on the possible effects of the adaptations. When I</a name> ask people to write a poem with another person I am conscious of how this can be a moment of practicing collaboration, assertiveness and social skills. When I ask a group if they would like to share their poems I am aware of the possible tension this might create. This is why I am very grateful to undergo exercises like this one, it makes me feel what the exercise does to me, and brings me a bit closer to sharing it in an adequate way with others. So if this article has made you enthusiastic about using this exercise, keep in mind that before you try it on others, try it out on yourself!

The sharing of the poems can be done verbally. Alternatively you can ask people to pass on their poems and allow people to write thoughts or compliments on the blank side of the paper. If you collect all the papers and pass them out randomly you can inject some anonymity to lower the threshold of sharing something personal.

After creating the writing you can instruct people to collaborate in the constructing of a poem. This can be done in many ways, like choosing sentences for each other with which the other has to create their poem. Or having multiple people select sentences from their writing and then creating one poem with them. Here you can again give a time limit to make sure the focus is less on the product.
Another example of a variation I found when I gave a workshop to a small team within the context of a ‘inspiration day’ with their whole department. I used this exercise with a sentence stem regarding inspiration. Every person wrote a completely different piece. I then asked them to underline a few striking sentences of what they had written. From here I asked them to construct a poem together using all these sentences. I instructed them to stand in a line and had them read out their sentences starting with the person at the start of the line. They then kept switching places and re-reading the poem to find the best order of lines.

Buchalter (2015, p. 106) approaches this uses a form of free writing in an art therapy context she calls ‘brain dumping’: “It’s best to let your mind tell you when you’re done. (…) You can start with a specific thing that is causing you stress or anxiety, but let your mind take you wherever it wants to roam. The point is to get all your thoughts out on paper so they don’t eat away at your mind. This is a good way to gain a new perspective of your situation with a deeper level of understanding about how you feel. It’s also a great way to release your creativity and free your mind to think of ways to get out problems. This process helps weed out destructive or unproductive thoughts, to get the thoughts that will help you move forward.” 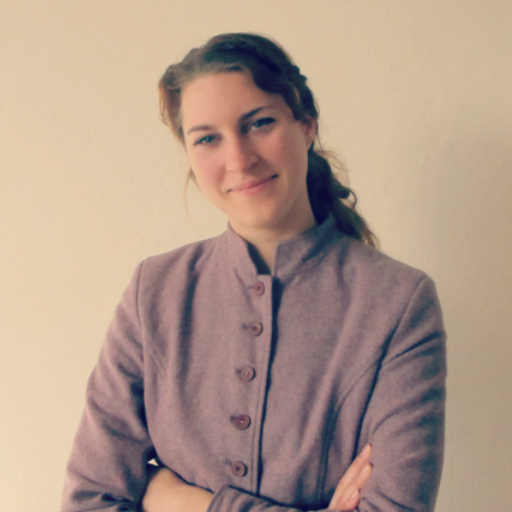 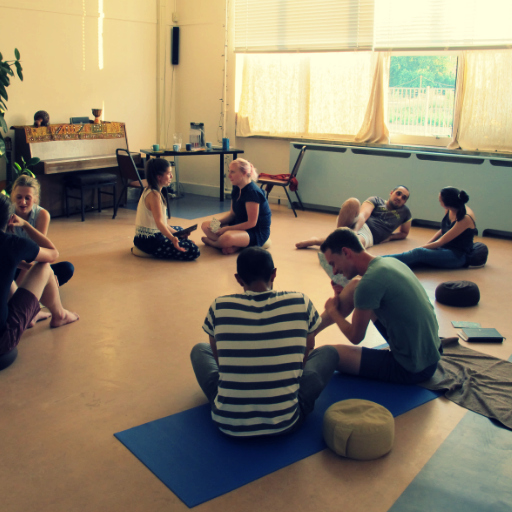